Meet the cast of "Money Matters"  Connie Wagner - as - Annie

NO TICKETS AT THIS TIME 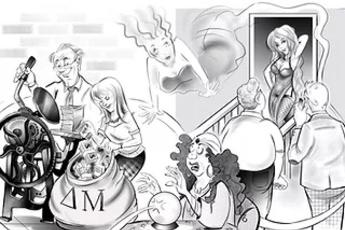 The Crime
The late Mr. Hammond spent twenty years printing $20 bills on a printing press he built in the basement of Monet Manor. After his death ten years ago, his faithful retainer (Who just happens to be a hypochondriac) George and his daughter Annie (Who never understands her Dad's countless jokes), continued the family business for Mr. Hammond’s widow who recently passed away. Contrary to her promise to leave the manor and all her assets to George and Annie, she has bequeathed the manor to a stranger, Mr. Bud Davis.

The Problem
George and Annie offer to buy the manor from him, but he is emphatic about turning it into a retirement home for ladies. Determined to keep the manor, Annie invites an old friend and sorority sister, Charmaine Beauregard (*A Southern gal from the play, Sex Please We're Sixty), to play the role of a ghost, to help convince Bud that the manor is unsuitable for a retirement home because it is haunted.

The Chaos
Bud arrives with his architectural adviser, Bernard Oppenheimer, a man very much interested in making money. Charmaine isn't surprised when Bud Davis turns out to be, ‘Bud the Stud”(*Yes, the very same character from Sex Please We're Sixty) a geriatric chick chaser and an old flame of hers.

Spring and Fall Shows held at the